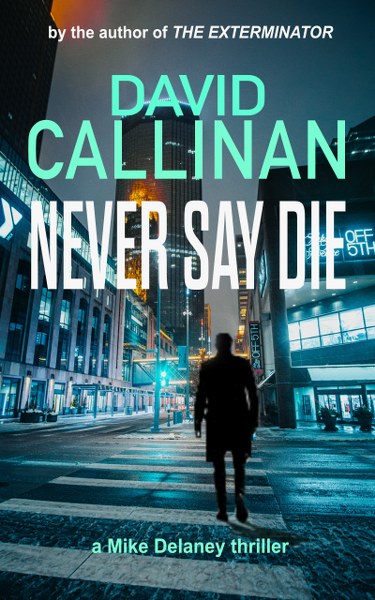 They murder scores of young women and steal their DNA.
They think their freakish assassin will never be caught.
That's their first mistake.
Then they kill Mike Delaney's pregnant wife – a journalist close to uncovering their terrifying global plot.
That's their second.
Ex assassin, cop, and warrior monk, Delaney swore never to kill again.
Now he has no choice but to break his vow.
Praise for ‘Never Say Die’
The main plot will blow your mind – Dingy Deb
Wait until you meet the killer in this book - like no-one and all of them you have ever read about.
The one thriller you should NOT miss – Anna Vahlinder
Standing ovation and a nomination for best thriller EVER written award (if there is such an award). Masterly. Sheer genius.Thrilling from begin to the very end – E. Memelink
Wow! What a thrilling book! A thriller with a very clever assassin, but an even cleverer Delaney. I just couldn't put it down. Loads of action and tense drama. Well worth a read –Ken Robson
A tense psychological thriller. Ex-special forces guy Mike's wife gets killed brutally, and he goes into a monastery to try and reconcile his life. But real life interferes, and he goes on the track of his wife's killer. David Callinan has a winner here – J. Johnson
David Callinan absolutely ROCKED THIS. Mike Delaney is my new favorite hero.
Callinan has given readers a great ride – Robert Gill
David Callinan has written a taut, fast-paced, page-turner of a novel. It’s a non-stop thriller that features a villain on par with Dr. Lecter. In the vein of a Preston & Child 'Gideon Crew' novel.
My confession. This is a great read – Tammy Windsor
Callinan weaves a very intricate and addictive web of suspense that I found unable to resist or put down until the end. I can't wait to read what is in store for Delaney next.
Goodreads * Amazon 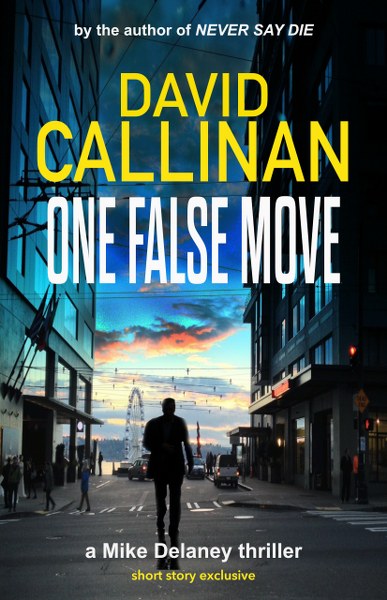 Don't blink! A crazed escapee and child abuser knows where you are
He kidnaps Mike Delaney's wheelchair-user friend and his 15-year old daughter.
He must trade his life for theirs.
Delaney has just four hours to locate and rescue them from the hands of a monster, a figure from his past, hell bent on turning the screw and wreaking revenge on Mike Delaney.
**Get it FREE!! **
Goodreads * Amazon 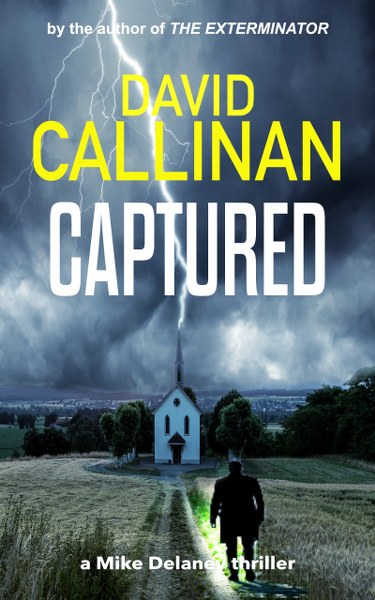 A seductive woman with a deadly secret. Mike Delaney is in the right place at the wrong time
Delaney is an avenger with the soul of a Zen master
A woman on the run from a ruthless cyber gang sees Mike Delaney on the street. In desperation she drops something into his pocket and snaps him on her cell phone.
From that moment the ex-US assassin, ex-Hong Police enforcer and ex-monk is sucked into a war against an enemy that will stop at nothing to get it back. Whether he likes it or not, Delaney is now an accomplice and must track down the woman and bring the gang to justice.
Then he comes face-to-face with Mammoth.
Goodreads * Amazon 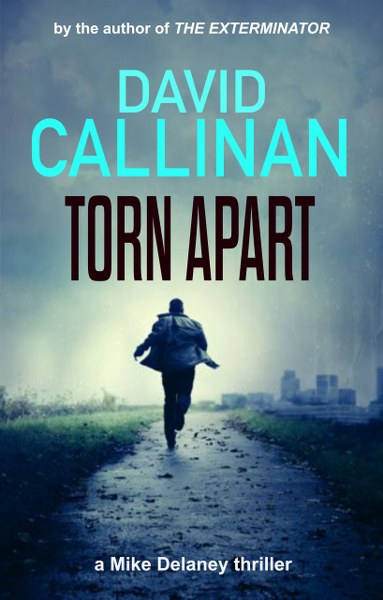 A Catholic nun. A deadly assassin. Bound together by blood. Twins torn apart at birth..
Then they are reunited.
This detonates an unstoppable explosion of events that embroils Mike Delaney in the battle of his life.
Hunted by 'the sepulcher killer' who uses an ancient and long forgotten weapon.
Ex assassin, Hong Kong cop and one-time warrior monk, Mike Delaney is part of confess-confess, the citizen's crime busting website. When he falls for a sob story in Ireland (the land of his birth) he is catapulted into a nail-biting battle for survival and sucked into an international conspiracy.
Delaney was simply doing a favour for an innocent Irish nun. He didn't expect it to spiral into a fight for survival, and grapple with an almost unstoppable force.
Identical twins unable to avoid their destinies. Will they both survive? 'You'll never read more high-octane thriller this year. Or any year.'
5-star reviews
'The best action adventure thriller I've read this year' aweston39
'For fans of deMille, Child, Patterson. Pulse Pounding' Texas
'Leaves you breathless, helpless, heartbroken' Tex
'You will never guess the end' Dorothy Stone
Goodreads * Amazon 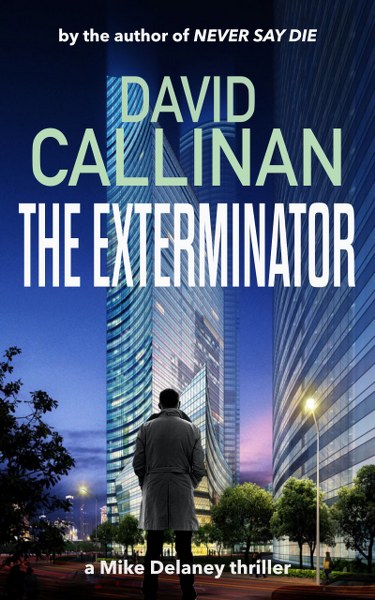 A 'Big Data' corporation. A deadly algorithm. How many are programed to die?
Mike Delaney's past as a retired assassin erupts to entangle him in an international high-tech conspiracy. When his former commanding officer is murdered Delaney's true identity is uncovered.
He stumbles upon a plot at the heart of government. When Delaney uncovers the real truth about the program, he cannot be allowed to live.
Delaney is sucked into an investigation along with the seductively attractive Melody Roth, whom Delaney finds a potent brew.
Then a bizarre assassin is hired to track him down.
Can he escape The Exterminator?
Praise for The Exterminator:
David Callinan has written an explosive thriller that will keep you locked in until the final word,'
Anne Keeran
Another thriller filled with unending heart stopping situations with impossible ways to be extricated,'Amazon review
If you are a Tom Clancy fan you will really enjoy this Mike Delaney book series,'Linda McCutcheon
Goodreads * Amazon 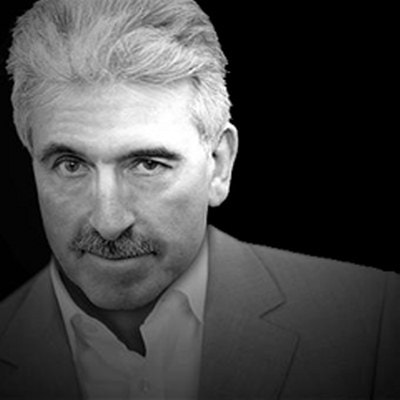 David Callinan is Anglo-Irish, born into a family from Limerick in the west of Ireland who grew up in the UK. After a spell at art school, early years saw a host of jobs from telegraphist to salesman – before discovering music. After busking all over Europe he rediscovered Irish music and formed The Spalpeens playing all over the UK, Europe and Ireland touring with The Dubliners, Sweeney's Men, The Chieftains and many others.
He appeared in films such as The Lion In Winter (Peter O'Toole, Katherine Hepburn) and Sinful Davey (John Hurt) and scores of television advertisements (was even directed by the late, great John Huston).
Later, he formed Urban Clearway, touring and performing with artists such as Elton John, Billy Connolly, Rod Stewart and Long John Baldry.
He co-wrote a Celtic rock opera for the Edinburgh Festival. 'Pucka-Ri' starred a young Pierce Brosnan and became one of the hits of the Fringe, before transferring to the Arts Theatre in London.
Latterly, an earlier spacey, folk-rock album, Freedom's Lament, recorded by Callinan-Flynn, has emerged as a highly sought after title on the Internet – and new wave Irish chanteur Sean Tyrrell has recorded a number of his songs on recent albums.
He began to write seriously, producing a string of screenplays and novels, the first of which, 'Fortress Manhattan' was published by Gollancz (Orion) and the '10-Minute Miracle' by HarperCollins.
Current books include thrillers: 'The Immortality Plot'; 'Knife Edge'; 'Bodyswitch' and 'An Angel On My Shoulder'.
He has written the YA fantasy trilogy, 'The Kingdoms Of Time And Space' and a chapter series for 7-10 year olds, 'The Weather Kids'.
Website * Facebook * Twitter * Instagram * Bookbub * Amazon * Goodreads